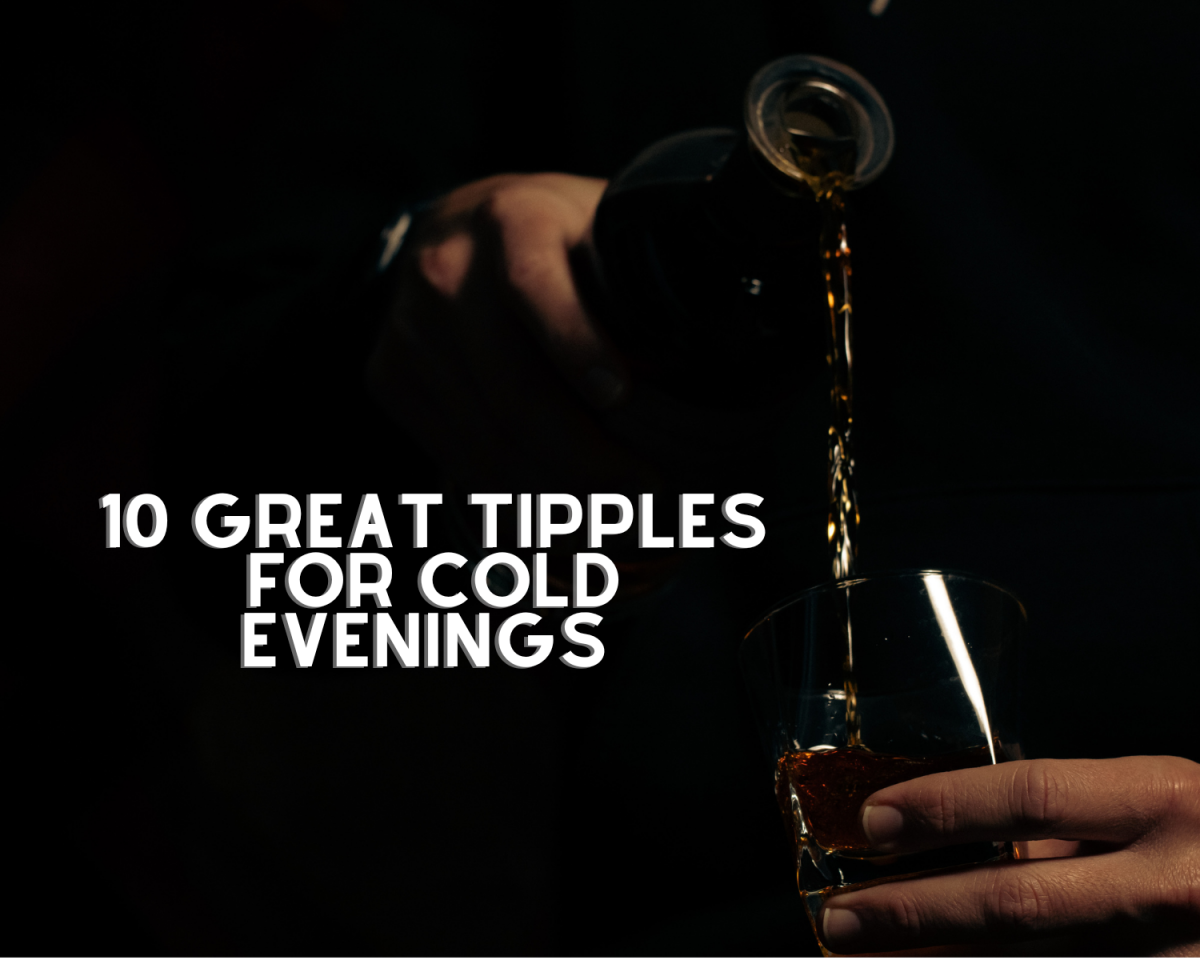 Peat and sherry go hand in hand, and this whisky proves it! The 10-year-old release was finished in ex-sherry casks for up to 12 months, adding an amazing layer of fruitiness to the Islay smoke bomb, followed by dark chocolate sweetness, and of course peat. With Oban literally meaning “Little Bay” we must say they used some pleonasm for this release, nevertheless, the liquid in the bottle is very robust and pleasant, with complex flavours invading the palate, like orange, chocolate, spices, and nuttiness. Yum! Up for a fancy dram? The XO is Hennessy’s synonymous with excellence. The iconic Cognac is well-rounded and full of heat, sweet notes, woodiness, chocolate, and a spicy edge. Created in 1870 for Maurice Hennessy’s circle of friends, it was one of the first Cognacs to be classified as “extra old”.

Nothing better than a cask-strength whisky to warm you up. This “handsome” release of 13-year-old Linkwood will surely surprise you, as even if bottled at the high abv of 57.3% it carries itself extremely well. Balanced notes of nougat richness, silky mouthfeel, and hints of salinity on the finish. Just delicious. Brine, orange, exotic fruits, kippers, and smoke. The age statement on this release from Lagavulin adds in more complexity to the dram. As expected from an Islay malt, the peat is heavily present, but it also has a lovely sweetness to it, making it a great sipping whisky. Due to Taiwan’s warm and humid climate, this whisky has an incredible complexity, even without an age statement. Kavalan, being a relatively new distillery, has achieved a great following in the whisky world, winning multiple international awards over the years. Tropical and elegant would describe this dram well. Once the smallest distillery in Scotland, Edradour’s 10-year-old is a classic sherried Highland dram, matured in both ex-bourbon and Oloroso sherry casks. Dried fruit richness, spice and nuttiness notes on the palate are followed by a syrupy warmth. The distillery founder, David Perkins, sought to combine peated single malt with bourbon and rye to create a unique and interesting dram. These three types of spirit balance each other beautifully, bringing together toffee sweetness, honey, rye spiciness, and a slight peat influence on the finish. This Scotch comes from the Islay of Mull, aged for 17 years in Oloroso Sherry casks, and bottled at the cask strength of 55.9%. Full-bodied, rich, and spicy, the palate brings forest fruit sweetness with lingering orange and warming spices. Perfect for Autumn. Ok, I’m a fan of the classics. From Fall of Rome to Poseidon – as a sailor, his ability to create storms was a note to tread softly. Don’t forget the queen of the sea Amphitrite, or Escoffier the king of chefs and chef of kings…finisher of French mother sauces that are the basis for France’s stunning classical cuisine.

That also applies to Cocktails! Yep, classic cocktails. None more so than the Old Fashioned, named around 1880. Now there were claims from Kentucky to New York as to the original creator. No matter who it was, we are all grateful, as it’s one of the top most popular cocktails in the world!

Ok, so my point is there are many new variations, some ok, some good, and some brilliant ones. I am currently enjoying exploring it with Stalla Dhu Glenrothes Late hour port cask. That really hits the spot! More about new styles later, this is about my venture into classics.

So I’m in Edinburgh doing a little research *wink wink*, I decided to go for an old-fashioned solo walking tour, why not, this is the best city in the World to walk around. Where to start though!? Since the high-end Hotels are proclaiming to be top of the game for cocktails, that’s where I’ll start. The first stop was the Caley, or Waldorf Caledonian as it is properly known, the place of my first job as a trainee manager back in the ice age! Anyway, it is also a Waldorf (claimed as the first to serve the famous cocktail at its namesake in NY). I sat in lovely Peacock Alley and waited for my first of the day after a prolonged wait (apparently needed to find someone skilled), it arrived with a wee bit of orange rind floating over the correct block of ice. I asked which bourbon was used and the charming young lady left, and returned a few minutes later with the answer; Woodford reserve! Well done, pleasant, light on bitters, no orange oil detected but all in all, pretty good.

Next, off to what used to be her sister hotel at the other end of Princes Street, The Balmoral. Formerly the Victorian North British. In the now deco-influenced bar, I grab a stool, one of the few available. I was pleasantly attended to by the suited-up deputy manager. I ordered and watch the preparation. Let’s just say, the service is the best of the day…although I could have done without the cherries! Correctly proportioned, correctly stirred, correct block ice, and orange rind rub made with the very acceptable Angels Envy. The result was very good. Hope filled with enthused anticipation, I follow off to the next venue.

It’s an uphill hike to Hotel du Vin. It plays double duty as I can have a cigar in their little Bothy, so that’s a bonus. I Settled down with my Placencia Orchant Seleccion as I awaited my third of the day. In the shelter of the windy weathered hut, I did sit next to the timer on the fireplace to assure continuity of comfort.

Now, this is one of my go-to spots in Edinburgh, so expected a good result. Unfortunately what arrived was rather void of flavor and my rather preoccupied waitress was unable to advise what the bourbon was. No matter, the small ice cubes were rapidly diluting what flavor may have been there.

Anyway, disappointed, I enjoyed the rest of my smoke and headed to Apex back at the east end of Edinburgh where I had a room. It’s a newish, rather slick minimalist hotel, but very trendy. So I thought maybe a trendy old fashioned? Oh boy, I should end it here because nothing to say but wow. Dreadful, watery demise of one of the greatest of cocktails. Poor Makers Mark couldn’t save this from the soulless presenter of libations…agh!

Ok, we shouldn’t go out on this note, so let me tell you of two brilliant Variations! New or old, Sláinte to a cocktail for the generations.

One of my favorite places on the planet is Aberlour, the pulsating heart of Speyside! ”Whisky Capitol of Scotland’, perhaps even The World. 🙂

This lovely town is situated on the fast-flowing, ever-stunning, famous river Spey. On my trip up from Edinburgh on the A9 in torrential rain and flooding, it looked like the Highlands were discouraging my venture north! However, as I followed the road thru the beauty of the Cairngorms wee bits of sunshine started peaking thru and moist air made way to a fresh warming as the light bounced off the purple hills. By the time I made my descent into Aberlour the sun bathed the town, and I felt the warmth of its welcome embrace! Confirming in me this visit, as with all others, is excitingly satisfying.

Heading directly to my favorite Scottish whisky bar, The Mash Tun! Wow, this place is just full of character. The Tun’s character is housed in an Iconic ship-shaped building designed by an old sea Captain in 1896 who missed the sea. James Campbell successfully created a maritime feel with views of the passing river. As a sailor and sea captain myself, I feel very much at home here.

I am also extremely excited to add to the Tun, a selection of Stalla Dhu’s award-winning single cask whiskies to compliment their already stunning selection.

If you need recommendations, chat with the brilliant whisky man Ryan and he’ll be able to guide you.

Keep an eye on this great wee spot there is a ton of exciting things happening at the Tun in near future. Worth the journey and worth the pause to experience it!