It’s that time of year again. Johnnie Walker has released the bottling for this Lunar New Year, and it is Year of the Tiger! This year’s limited edition design has been brilliantly illustrated by the Chinese artist, Shan Jiang.

“The tiger is a symbol of great confidence and bravery, celebrating progress and prosperity.”

Blue Label is of course a blend of the company’s rarest whiskies that have been carefully put together to deliver that signature smoothness. Grab your limited edition here and add another one of JW’s beautifully designed bottlings to your shelf!

Diageo has announced the lineup for this fall’s Special Releases, and they look exciting! This year’s releases, for the first time, are featuring artwork from a popular illustrator.

The stories and Legends will be revealed later this autumn during their release! Until then, here’s the quick breakdown of what’s being released.

Until these amazing looking releases come out, go check out some of the previous Diageo releases HERE.

As Robert Burns’ birthday is approaching, we get our favourite haggis and our bottle or 2 of whisky to enjoy! This year is definitely going to look a lot different, but doesn’t have to be less enjoyable. We can embrace the suck and press forward with some delicious food and great whisky! It’s definitely going to be smaller, just your small pod of people, or a video gathering of all your favourite people. It’s up to you. Do something a bit more special or unique this year to compensate for the lack of gatherings.

We have put a small list of whiskies to help give you ideas for that wonderful Burns night tipple.

This beautiful Islay is the newest edition to our Stalla Dhu range of independent bottlings. Bottled at cask strength and aged 11 years in a hogshead cask. You get a lightly salted sweetness, toasted almonds, slight pepper with smoldering embers. This is rich and peaty, sure to satisfy those Islay lovers out there. Limited to 287 bottles!

Part of last year’s Special Releases from Diageo, these are chosen to be a unique offering from some of our favourite distilleries. This is an unusual first-ever refill cask release of Singleton, being matured 17 years in refill American oak hogshead. This release lives up to the distillery’s smooth and balanced nature! Wonderfully creamy, fruity, a touch of fresh cut grass, and perfectly balanced.

A tried and true Highland whisky that brings the wonderful sherry flavours from Oloroso and Pedro Ximenez casks. A great after dinner dram to wash down your lovely haggis, neeps & tatties! This GlenDronach is just a fantastically smooth dram with creamy vanilla, dried fruits, and of course the heavy dose of sherry!

Another one for those that love the wine cask finished whiskies. This Port cask finish from Arran is a perfect pairing with a lovely cheese board, maybe bought from the Isle of Arran Cheese Shop! Charming and rich, with splashes of citrus, vanilla fudge, and ripe cherries.

A special edition Highland Park, that for the first time was created buy 3 of the distillery’s legendary whisky makers! Three principal cask types were hand chosen by each of the distillers, then combined to showcase the influence of wood and cask seasoning. First-fill sherry seasoned Spanish oak butts, first-fill sherry seasoned American oak casks and first-fill ex-bourbon barrels and hogsheads casks. A complex, full-flavoured Highland Park that boasts vibrant orchard fruit notes, with heather honey, and just the right amount of peat smoke! 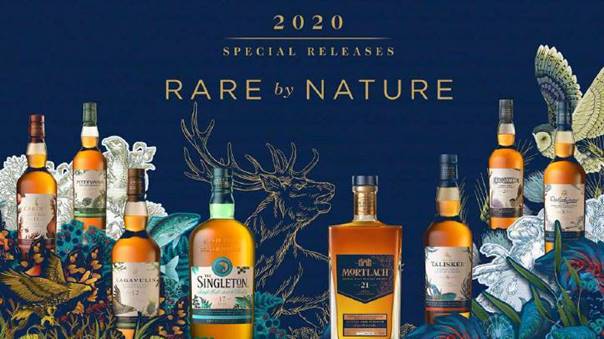 I thought I’d post a brief run down of the recent Diageo releases for the few that haven‘t yet seen them! They have a great selection of some fantastic distilleries this year. Eight highly sought after whiskies that showcase Diageo’s incredible whisky stocks from over 30 different distilleries! They do this to highlight some long forgotten drams and more experimental expressions that are sure to excite the collectors, as well as the drinker.

With all that said, here are the 2020 Special Releases “Rare by Nature”:

This unusual first-ever exclusively refill cask release of The Singleton Dufftown has been matured for seventeen years in refill American oak hogsheads, to showcase the fresh, spring-like nature of this slowly crafted single malt.

From a malt rich in maritime character, this adventurous release of Talisker is the first ever to be finished in pot-still Caribbean rum casks.

This Mortlach was matured for rich distillery character in small batches then carefully finished in Pedro Ximenez and Oloroso- seasoned casks to build yet more levels of aroma and taste.

CASKS: From refill hogsheads and butts selected for quality alone

This single vintage Lagavulin has been matured in traditional refill American oak casks selected to give a perfect expression of distillery character. Soaring in taste and intensity, the flavour is powerful and assertive yet subtly sweet.

Clean, elegant and perfectly poised, this Cardhu was made in small batches and matured in refill casks, as well as new and ex-bourbon American oak, drawing out tones of floral sweetness and spicy intensity in a playful exchange between wood and whisky.

A Cragganmore of this age has never been released from the distillery, making this elusive malt a much anticipated expression. A small, experimental batch of cask strength and medium-peated Cragganmore matured in traditional refill American oak casks.

This ultra-rare single vintage Dalwhinnie has an astonishing bright intensity for its age and comes uniquely from refill American oak hogsheads, all of which were casked in 1989.

This elusive 1989 Pittyvaich from the last remaining stocks is the first ever to be finished in first-fill ex-bourbon casks.

Most of the time when we decide to spend a good amount of money on a single bottle of whisky, a lot of people will go for a bottle of single malt. Not always, but quite a lot. Sometimes really nice quality blends can be overlooked. That’s why I thought this Friday was a good day to try one I haven’t yet had. Happily we had an open bottle of Collectivum XXVIII!

Collectivum XXVIII was part of Diageo’s Special Release series for 2017. That definitely caused a little unnecessary fuss from some closed minded people because they included a blend into the line-up for the first time. Once certain people could get over their fussiness, they realised it most definitely could hold it’s own amongst the rest of the single malt line-up.

This is kind of the blend to end all blends! This natural cask strength bottling is a blend of ALL 28 operational single malt distilleries that Diageo owns! Like the Avengers all these malts came together to form some super blend. The first one of it’s kind!

At 57.3% this tasty treat has a wonderful kick to it! This is a very silky and balanced blend that shuffles through tastes as you sip, especially if add periodic drops of water. The slight acidity tantalises the tongue in a good way with wonderful lemon and citrus flavours. Nice notes of dark chocolate covered alomonds and an undertone of oak.

They did a good job of putting this blend together and I believe most people would be highly delighted with a bottle of this. It is definitely one of those special bottlings that do not come around often! If you don’t want to spend the money on a bottle, try and find a nice bar that has one…when it’s safe to do so!

If you want a bottle for yourself, we have some here. Diageo will be releasing their 2019 Special Releases collection later this fall. A collection selected by Diageo master blender Dr Craig Wilson. ‘Rare by Nature’ is this years theme and will be a collection of 8 rare bottlings from the company’s different distilleries.

Even though they are not released yet and no prices available, Diageo have released what whiskies are on the list. Definitely some really exciting ones on the list that we can’t wait to try! None from Cao Ila or any blended malts this year, but we’re not complaining! Have a look and see what you think.

“Each transports you to its heartland, connecting you to that particular part of Scotland and the very people who shaped each dram.”

We will let you know later when more is released. Until then, happy drinking! 🙂